the impulse that drives artistic expression is irrational, unconditioned, and impersonal. it is beyond the grasp of reason and its constructions, which allows it to make the being resonate at frequencies that reason is not able to reach, and thus initiate it into experiences that are beyond his comprehension.

Permission to Shine round two is calling all Pop, Soul and Folk singers

It’s your time to shine now … as round two of Play It Forward’s online singing competition Permission to Shine is open!

This is a great opportunity to participate in a brand new and innovative international competition.  Jonathon Welch, our founding artistic director, comments “Permission to Shine is open to everyone.  Entries are welcome from amateurs through to music students and also professional singers, from…

Essentially written in one day in March 2013, « One Of A Kind » is an upbeat folk pop summer song about meeting someone who turns out to have special significance in one's life, and eventually becoming so close as to form a kind of unit with them.

Ultimately, it's also about how every encounter, whether apparently desirable or otherwise, actually contributes to one's growth and to finding one's place in the grand scheme of things.

Here are the lyrics…

Play It Forward, together with Dr Jonathon Welch AM, is thrilled to announce that round one of Permission to Shine is open.  This online singing competition with a difference starts with three sections - Music Theatre,…

Permission To Shine - A True Celebration Of Voice!

Play It Forward, created by founding artistic director Dr Jonathon Welch AM, is excited to announce the upcoming launch of Permission to Shine, a new online singing competition with a difference.

"We have really embraced the opportunity the take our programs online…

Allegory of the Long Spoons

« The allegory of the long spoons is a parable that shows the difference between heaven and hell by means of people forced to eat with long spoons. »

« In each location, the inhabitants are given access to food, but the utensils are too unwieldy to serve oneself with. In hell, the people cannot cooperate, and consequently starve. In heaven, the diners feed one another across the table and are sated. »

« Given the same level playing field one group of…

dare i reveal how we have been misled
by values that want us to be apart
told only a fool could follow their heart
by demons of greed, reason, and hatred

yet truth is no stranger to…

from there we edged ever closer to hell
dying nature, fires, foul climes above
divided souls all longing for some love
while minds dreaded for them would toll the bell

and now a plague warns us with its dark chimes
to see we're tied, us threads of the same rope
against which…

is it a door i hear, a voice, a pace
or only an echo, a whim, a wraith
a breeze, a thought, a threat without a…

that there's no simple way
to…


what was there left to do
at the edge…

Come sing with Westchester’s highly acclaimed community chorus, Hudson Chorale. The group is welcoming new members in all voice parts (SATB) to join for an exciting concert season of great, much-loved choral music. Singer-friendly auditions will begin on Monday, September 9, 2019, by appointment, from 6:00 – 7:00 pm, prior to the first rehearsal.  Rehearsals take place on Monday evenings from 7:15 – 9:45 p.m. at the Pleasantville Presbyterian…

There is truly something at #MISF19 that will appeal to everyone’s musical tastes.  Be Challenged, Inspired and Entertained.

Now in its tenth year, Australia's most exciting singers festival for all choirs, singing groups and individual singers, is proud to present a bigger and even more diverse program over the Queen's Birthday long weekend in Melbourne.…

Hudson Chorale, the area’s largest mixed voice chorus, is poised to please.  The group will begin its 2019 season with two matinee concerts on Saturday, January 26, 2019 at 3:00 pm and Sunday, January 27, 2019 at 3:00 pm that highlight Gabriel Fauré’s exquisite Requiem with professional orchestra and soloists, along with a collection of motets by Felix Mendelssohn, Anton Bruckner…

Taconic Opera invites experienced choral singers to collaborate on an upcoming performance of the VERDI REQUIEM with the Taconic Opera chorus and orchestra. Applications will be accepted during the months of November and December 2018.  Those who have performed this masterpiece before don’t need to be told how powerful an experience it is; those who haven’t won’t want to miss the opportunity.  The program will be conducted by the… 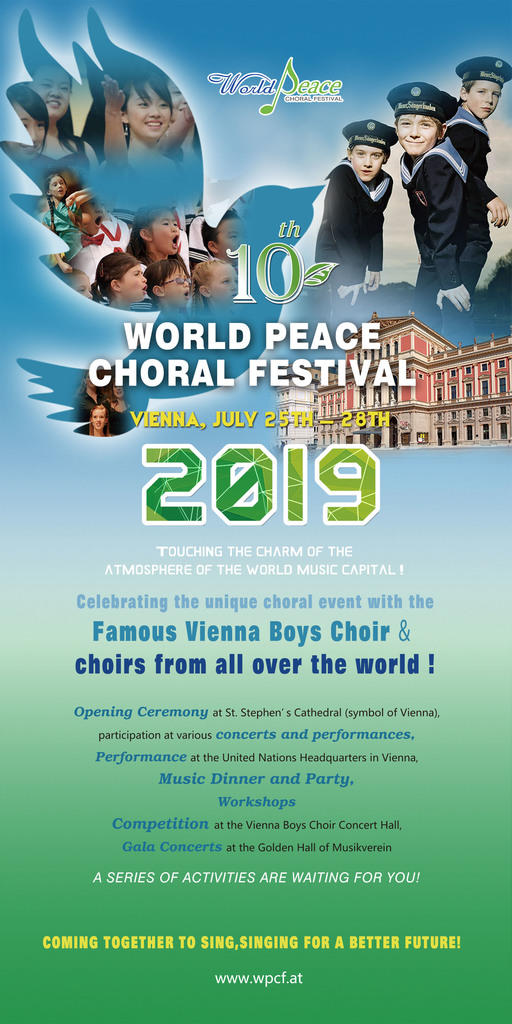 Media Release from the office of Dr Jonathon Welch AM

After twelve years at the artistic helm of the ‘choir that inspired the nation’ on the ground breaking award winning ABC TV series ‘Choir of Hard Knocks’, Founding Artistic Director Dr Jonathon Welch AM has announced his retirement from the Choir at the end of December 2018.

“It has been the journey of a lifetime and an honour to work with,…

12th International choir and orchestra festival in Cracow (Poland)29.09. - 03.10.2021CRACOW – one of the twelve most important towns in the worldThe former capital of Poland is one of Europe’s last undiscovered destinations by mass tourism. Here the Holy Father Pope John Paul II served as a Bishop for more than twelve years. Centre of the old town is Rynek (main market…See More
Wednesday
0 Comments 0 Likes

the impulse that drives artistic expression is irrational, unconditioned, and impersonal. it is beyond the grasp of reason and its constructions, which allows it to make the being resonate at frequencies that reason is not able to reach, and thus initiate it into experiences that are beyond his comprehension.See More
Saturday
0 Comments 0 Likes

more an improvisation than a proper arrangement of Bart Howard's jazz standard « Fly Me To The Moon, » made popular by Frank Sinatra. recorded in july 2020. ...
Aug 1
0 Comments 0 Likes

this is a recording of a song titled « Hope » which was originally written around december 2012, and intended as a lullaby for grown-ups. the audio and perfo...
Jul 22
0 Comments 0 Likes

Choral Workshop with the International Oratorio Choir.This year the Coronation Mass by W. A. Mozart will be worked on. Groups of at least 10 persons can take part in the project.Terms and conditions for singers and further information you will find on our website https://www.choral-workshops.com/See More
Jul 22
0 Comments 0 Likes

As a summer opera program for emerging singers, the  New York Opera Conservatory had to re-think a way to not disappoint its students in light of the covid epidemic. But how do you maintain social distancing in opera rehearsals and performances?  How do you lift moods during such an intense period of uncertainty?  The Conservatory’s answer was to make the pandemic the backdrop of an opera, and some of its consequences a part of the production!  Since Mozart’s Don Giovanni (a dark tragedy) had…See More
Jul 20
0 Comments 0 Likes

Permission to Shine round two is calling all Pop, Soul and Folk singers

It’s your time to shine now … as round two of Play It Forward’s online singing competition Permission to Shine is open! This is a great opportunity to participate in a brand new and innovative international competition.  Jonathon Welch, our founding artistic director, comments “Permission to Shine is open to everyone.  Entries are welcome from amateurs through to music students and also professional singers, from right across the world.” The Permission To Shine team are delighted with the…See More
Jul 18
0 Comments 0 Likes